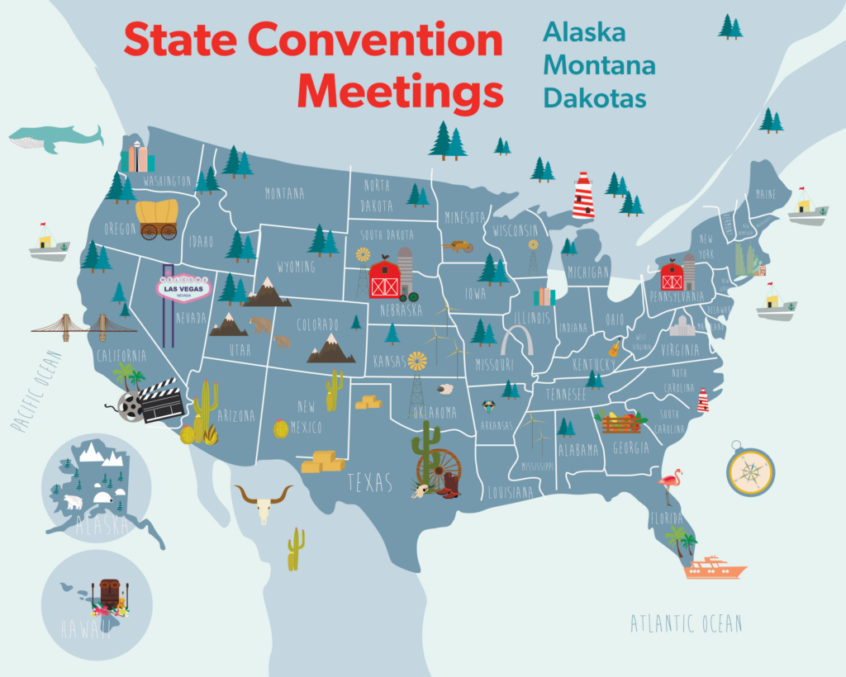 The 119 messengers from 50 of Alaska’s 120 congregations were able to vote electronically as well as to interact with those at the in-person meeting. The distance messengers were said to be “in the gallery,” Executive Director Randy Covington said. The meeting was held Sept. 29-30 at First Baptist Church of Anchorage with a theme of “Run with Endurance” (Hebrews 12:1).

“Our preference is an in-person gathering, but the change in the constitution and bylaws and articles of incorporation makes for hybrid or totally remote sessions,” Covington said. “It was a celebratory and unifying gathering.”

The first order of business – following “powerful worship,” Covington said – was to modify governing documents to allow for remote sessions. This was done for the Alaska Baptist Convention, dba Alaska Baptist Resource Network, its Foundation and its Family Services.

Longtime partners participated in Alaska’s annual meeting. The South Carolina Baptist Convention purchased, prepared and served lunch and dinner Tuesday, and the Alabama State Board of Missions presented Alaska Baptists with a $75,000 check to mark the anniversary.

The only resolution presented was to “decry every form of racism as a contradiction to the gospel of Jesus Christ.” It passed “overwhelmingly,” Covington said.

Alaska’s retired executive director Mike Procter made a motion to begin re-directing, in 2022, “the percentage of Cooperative Program funds that traditionally were intended for the North American Mission Board, … be retained” for the state missions offering, … “until such time as there is a collaborative, cooperative and mutually agreed-upon strategy with the North American Mission Board.”

The motion passed with all but about a few voice votes, Covington said.

The 2021 budget totaled $860,787, including $686,048 from Alaska churches, of which $137,210 – 20 percent – is allocated for national Cooperative Program causes. The budget includes $100,000 from NAMB, as well as income from several small trusts held by the Alaska Baptist Foundation. In a change from previous years, LifeWay Christian Resources is not expected to provide any money to help promote Christian education.

Montana gathers for business and fellowship

Executive Director Barrett Duke said state leaders determined the annual gathering was necessary not just to conduct business, “but also make sure we encourage one another as we come to the end of a challenging year.

“We did decide to have a meeting and that itself is significant,” Duke continued. “We felt like we needed to get our folks together. We reduced it to a one-day meeting. … There was a great spirit in the building. As far as I could tell, everybody who came was glad to be there.”

The 117 people present for the annual meeting that Montana Baptists call ReFresh included 69 messengers from many of Montana’s 135 churches. In addition to powerful worship, encouraging messages and socially distanced fellowship for people from across the 560-mile-wide state, the eight-hour annual meeting included time for the following business:

“We’ve cut just about everything we can possibly cut for 2021,” Duke said. “Finances are difficult for everyone. There is diminished income all the way around. We certainly have our concerns about the role NAMB and LifeWay play in the western states. It’s a reminder to all of us: We need to come to the place where we are no longer dependent on external support. We need to get as quickly as we can to the place where we own responsibility for the work of our state convention.”

Montana’s 2021 annual meeting is set for Oct. 7-8 at Church of the Gates in Missoula.

The 81 messengers from some of Dakota’s 85 churches at the convention’s Oct. 7-8 annual meeting in Rapid City, S.D., “joyfully celebrated” the news, Executive Director Fred MacDonald said.

“Our CP giving is about 20 percent higher than last year even with the pandemic,” MacDonald said.

In order to make the budget, a staff position was eliminated and CP giving to national SBC causes was reduced from 29 percent to 25 percent. Fifty percent of churches’ CP giving in excess of the budgeted $420,000 will be forwarded to national CP, MacDonald said.

Three part-time, regional, church relations missionaries are to be added in 2021, and a fourth in 2022. These are to be men with pastoral experience in the Dakotas.

A formal installation of MacDonald as executive director took place during the Thursday evening session. He was elected in February and started work May 1. Recently retired Executive Director Garvon Golden brought the charge, and Dakota Baptist President Sean Donnelly and Dude Garrett, chairman of the state convention’s executive board, “challenged the messengers to constantly pray and cooperate together, and then there was a time of prayer,” MacDonald said. “It was very special.”

The 2021 annual meeting of the Dakota Baptist Convention is set for Oct. 7-8 in Mandan, N.D.