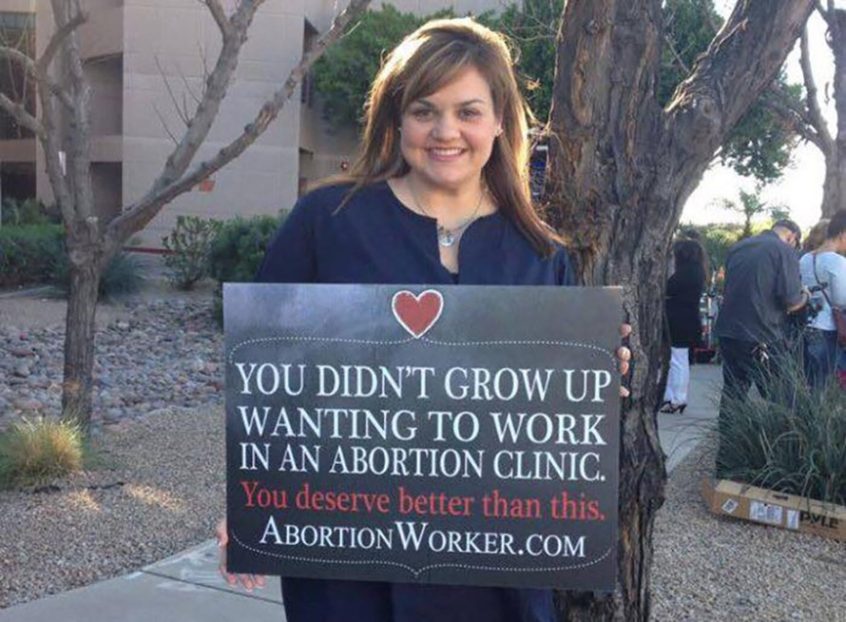 LOUISVILLE, Ky. (BP) — Much has happened during the past decade in the life of Abby Johnson, the woman whose life story is the subject of the pro-life movie “Unplanned.”

Abby Johnson’s organization helps those working in abortion clinics find a way out.Submitted photoIt has been 10 years since she left Planned Parenthood. She celebrated Mother’s Day with her husband and seven children, and she is pregnant with No. 8. Thousands on Times Square and thousands more via a livestream watched a 4D ultrasound of her eighth baby still in the womb during last weekend’s “Alive in New York” pro-life event that was put on through Focus on the Family.

In an interview with Kentucky Today, Johnson called it a “surreal experience. I never thought I would be showing my unborn baby to the world like that. But I’m incredibly grateful to Focus on the Family and all the people that made it happen,” she said.

An estimated 20,000 came to celebrate in the streets of New York City.

“I was honored to be asked to come,” Johnson said. “I never would have dreamed my life would end up like this, that there would be a movie about my time at Planned Parenthood and conversion, that I would be showing the world my eighth child, still in the womb, through a live ultrasound in Times Square. Look at what God has done.”

A movie that was made for $6 million has already grossed more than triple that total despite having mainstream media barriers put up against it. Johnson, who has promoted the film since January, said more important than the money generated has been how it exposed the horrors of abortion.

“Even time at home is spent doing interviews for the film,” she said. “But I get to wake up every morning to dozens of messages saying that people are bringing their pro-choice friends who have changed their minds on abortion, that babies have been saved because of the movie. That’s what I did this for.”

The film has brought more awareness to abortion issues at a time when state legislatures across the country are voting on pro-life issues in hopes that a conservative Supreme Court could strike down the 1973 Roe vs. Wade ruling.

Johnson told one of the biggest pro-life audiences ever assembled in one place, besides the annual March for Life in Washington, D.C., that “one day abortion will become unthinkable in this country.”

“People need to see what happens during an abortion. In Unplanned, it is shown in black and white on an ultrasound screen, exactly as I saw it,” she said. “We have heard from even pro-lifers that they didn’t realize that is how abortions are done. Imagine what pro-choicers feel. Everyone needs to understand that, yes, there is human life in the womb, and that, yes, abortion ends that unrepeatable life. Then I believe abortion will become unthinkable.”

Johnson said Chuck Konzelman and Cary Soloman, the producers and directors of Unplanned, emailed her about wanting to make a movie based on the book she had written by the same name about five years ago.

“I had no idea who they were but my husband Doug looked them up on IMDB and found out they were the directors of ‘God’s Not Dead,'” she said. “They met with Doug and I, getting to know us and our quirks, and explained their vision. They didn’t want to make my story into another cheesy, Christian movie. That was something I could get on board with.”

Johnson said God told them to wait before making the movie.

“I was able to read through the script, which was taken right from my book, and gave my feedback,” she said. “I was on set as much as possible during filming. So, yes, I was deeply involved in the making of the film and was thrilled at how it came out. Chuck and Cary did a wonderful job honoring my story.”

Johnson said Ashley Bratcher, who plays her in the film, “was born for this role and God chose her. I’ve seen the movie dozens of times and I still can’t really believe it’s happening, that my life was made into a feature film. And it shows all the worst parts of myself. But that’s what makes the story even better — that no one is beyond God’s redemptive grace and mercy.”

Johnson said she has become closer to God through the experience of the book and now the movie, which has allowed her to share her story to a worldwide audience. She has celebrity status in the pro-life world.

“My faith is central to my life and I not only pray and reflect daily but I also ask for prayers for my own family, my team, abortion workers, and all the women faced with an unplanned pregnancy,” she said. “I speak to people of all faiths. We have a lot in common.”

She has had plenty of criticism from those who support abortion — as well as the mainstream media and even politicians whom she has called out on social media. And she hasn’t spoken with her former co-workers at Planned Parenthood.

“I pray for their conversion and am always open to talking with anyone from the pro-choice side,” Johnson said. “I spent years on that side of the fence and understand where they are coming from.”

She started an organization, And Then There Were None, in 2012 that helps abortion workers leave the industry and find new jobs. Nearly 500 workers have left their abortion jobs through the organization, she said. They offer free counseling, resume writing help, healing retreats and limited financial aid.

Johnson worked for Planned Parenthood, where she was considered a rising star, but left the organization after personally watching an abortion that changed her life forever. She said she is humbled to be called by God to do this work.

“Look how God used some of the most hardened people in the Bible to do His work,” she said. “He softened their hearts and they became His fiercest warriors. I can only hope and pray that God continues to use me as He wills.”

Johnson said those who are pro-life need to get involved. That’s how a difference is made, she said. When asked what pro-life supporters in Kentucky can do about the lone abortion clinic in Louisville, she offered this advice.

“Keep praying outside that abortion clinic peacefully,” she said. “Work with groups like Sidewalk Advocates for Life to be trained on how to be an effective sidewalk advocate.

“Live your Christian life beyond the walls of the church by helping your local crisis pregnancy organization,” she said, “volunteer your time and talent, donate to groups who are making a difference in the fight against abortion.”

Besides being a crusader for the pro-life movement, Johnson said she’s happy being a wife and mother to four boys and three girls with another one on the way. One of the children is adopted.

Mother’s Days are always special, she said. But maybe none more special than this year for Johnson, who aims to continue her work to stop abortion.