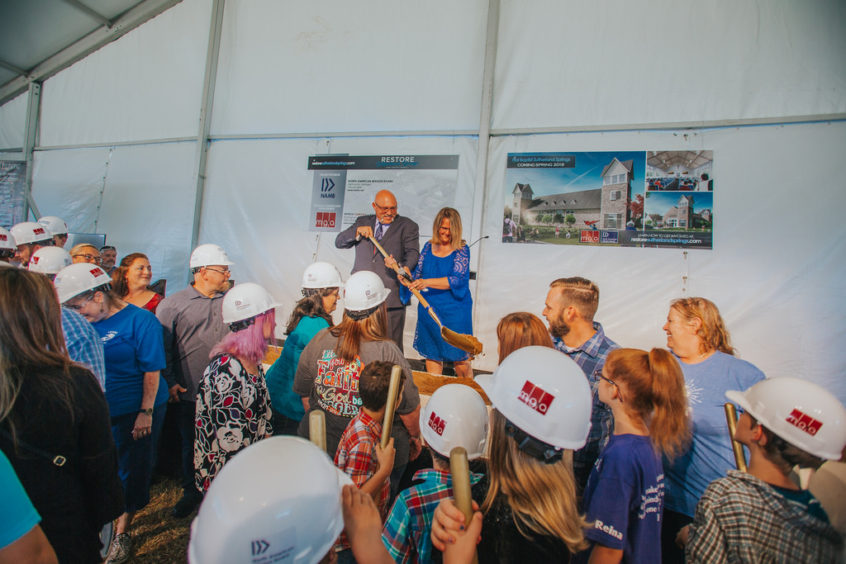 SUTHERLAND SPRINGS, Texas (BP) — Karla Holcombe, one of 26 victims to die in shootings at First Baptist Church of Sutherland Springs on Nov. 5, 2017, walked the lot adjacent to the church often, praying for God to provide a place for expansion. Members said the two-acre tract was too expensive.

“You’re not going to have to buy a church. God is going to give it to us,” Holcombe replied.

“God gave it to us,” Mark Collins said, recalling Holcombe’s story before some 350-400 gathered May 5, 2018, for groundbreaking ceremonies for the new Sutherland Springs facility.

The day of groundbreaking started with a prayer walk around the property where a $3 million facility will be constructed with funds from the North American Mission Board (NAMB), other financial gifts and in-kind donations. A GoFundMe account established by San Antonio contractor Brad Beldon provided cash to purchase the lot for which Holcombe had prayed. NAMB chose Myrick, Gurosky and Associates (MG A), a Birmingham, Ala., firm, to oversee the project.

Ted Elmore, Southern Baptists of Texas Convention (SBTC) point person to the church, coordinated the prayer walk at the request of Sutherland Springs pastor Frank Pomeroy. About 50-60 gathered on the sunny morning as the church praise band practiced nearby.
The prayer walk started at the construction site, then proceeded to the former sanctuary, now a memorial. Pomeroy scattered unleavened bread representing the body of Christ, poured juice symbolizing the blood of Christ and poured oil representing the Holy Spirit at both spots. Prayer followed.

The prayer event was an act of asking the Lord to cleanse and consecrate the land where violence had occurred, Elmore explained. Participants proceeded to the property’s boundaries — fenced by plastic construction sheeting — to pray individually.

Fresh from a trip to Washington, D.C., and a tour of the White House with Vice President Pence, the Pomeroys said they were glad to be home for the groundbreaking and prayer walk.

“We purposely picked this date so we could put something good on this anniversary,” exactly six months after the tragedy, Sherri Pomeroy told reporters.
Attendees filled a large open-air tent and sat on white wooden chairs facing a raised stage featuring a trough of dirt behind a row of shovels and hard hats.

“We have prayed this morning,” Sherri opened. “That is what this thing is all about.”

Frank Pomeroy followed his wife, issuing a welcome before introducing NAMB’s Mike Ebert, who prayed and emceed the program.

Ebert, NAMB’s director of public relations, expressed the Southern Baptist entity’s excitement regarding the rebuild. He stressed, as Pomeroy had, that no victims’ or survivors’ funds were being used for the new buildings.

“Today, everything you see was either paid for or donated by others,” Ebert said, praising the “ripple effect through eternity” of the church’s testimony.

Sutherland Springs encountered circumstances similar to those facing the first-century church, Elmore said. “The blood of the martyrs was shed in that room over there where they were worshiping Jesus,” he continued, reminding all that the “church of the Lord Jesus” was built on such blood.
MG A president Scott Gurosky followed Elmore, calling his company’s association with Sutherland Springs inspirational.

“We saw resolute souls and hearts ready to move forward, not back,” Gurosky said, expressing amazement at the project’s rapid progress from “concept to design” in 90 days.

Gurosky said 30 companies had committed to donations and in-kind services for the project. Gurosky confirmed local sub-contractors would be used and that Boerne, Texas, resident Gary Nazaruk had been coaxed out of retirement to become project manager.

Sen. Ted Cruz spoke next, proclaiming, “Glory to God,” reminding all that “181 days ago, this community saw the evil” but also saw strength, sacrifice, courage, passion and love.

Pastor Collins followed the senator, describing his long association with Sutherland Springs and Pomeroy. Collins discussed remembrance, emphasizing from Ephesians that the church must “stand and withstand” adversity “in remembrance of the promises of God.”

Mentioning that Pomeroy’s last sermon before the shootings concerned Proverbs 3:5-6, Collins produced a sign salvaged from the sanctuary, one of 18 framed Bible verses and the only one damaged in the attack. The verse was Proverbs 3:5-6. Collins returned the sign, with new glass, to Pomeroy.

After relating the story of Karla Holcombe’s prayer, Collins presented her son, John, with a crazily-colored tie for Mother’s Day. Karla had always laughed at the tie.

Frank Pomeroy brought a message from Ezekiel 11, explaining that the prophet also lived in turbulent times, which included the destruction of the temple in Jerusalem.

“We are not the first to experience horrific loss,” Pomeroy said, emphasizing that we must know the “victory is ours” and that “true sanctuary” comes from a relationship with God.

Expressing gratitude to NAMB and MG A plus all who donated, Pomeroy said his vision of Sutherland Springs as a lighthouse prompted a request to MG A for a bell tower.

He got not one tower, but two.

“One is a bell for the memorial; the other is a light for what God is going to do,” Pomeroy said Gurosky told him.

After prayer by Paul Buford, pastor of River Oaks Baptist Church, Ebert called up groups to wield shovels, don hard hats and ceremonially turn over the ground. The first group consisted of survivors and family members of victims.

During worship and baptisms following a barbecue lunch, Kris Workman played guitar in the praise band. Workman, shot point-blank in the spine last November, is wheelchair-bound with a “nearly complete” severing of his L2 vertebrae.

“My condition is not a surprise to God,” Workman told reporters. “This groundbreaking is a pretty incredible thing. It means God is still big.

Still in charge. A benevolent God has taken something meant for evil and turned it for His glory. This building is going to be for His glory.”