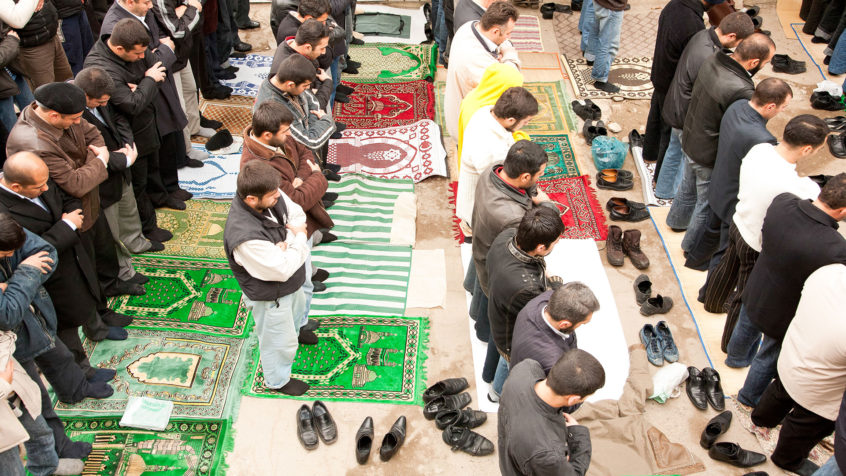 A young man from Uzbekistan came to my door the other day. With dark hair that fell across his forehead and the wispy beginnings of a mustache, he didn’t look like a terrorist. He just looked hungry. He stood beside his mom as she asked for a bit of food and a dirty old pot that she could clean and use for cooking. His younger sister tugged at their mother’s skirt and reminded her to ask for a blanket too.

The mom told me a familiar story: that life in Uzbekistan is hard, the economy in shambles, freedom restricted. They had migrated to another Central Asian country looking for something better, and now here they were on my doorstep. In her earnest requests, I heard the unspoken plea: winter is coming, and the nights are getting cold.
Unbeknownst to them, when they rang my doorbell, I had been loading my car with bags of warm clothes and shoes my children had outgrown, praying that God would get them into the hands of those who need them. This family was a clear and immediate answer to my prayer. I asked the young man, Ali,* to help me load the rest of the bags, and then offered to take the family wherever they needed to go.

As I drove, I told Ali and his family, “Look at the miraculous timing of God. He sees you and he loves you.”

The Face of a Terrorist

Two days later I woke up to the headlines about an act of terrorism carried out by an Uzbek man on American soil—the deadliest attack in New York City since 9/11. I read news articles about the radicalization of young men traveling to the West. I scrolled through Facebook commenters demanding that we close our doors to immigrants, with wide brushes painting all young men from Islamic countries as terrorists.

I wept because when my friends and family in the US see a picture of an Uzbek man—or a Kazakh or Kyrgyz or Tajik—they don’t see what I see.

They don’t know the dreams that fill the heart of a young Central Asian who gets the chance to go to America. Often the hopes of a family the size of a small village rest on the small shoulders of a young man such as this. Parents, aunts, uncles, cousins, friends—they sell cars and jewelry and anything else of value in order to help him make it to the West with the possibility of a better life for all of them.

Then he arrives in the land of opportunity and smacks into stark realities. His stuttering English marks him as a stranger. He is lonely and frightened of failure. He is unwelcome and isolated because many Americans aren’t eager to befriend anyone from a land whose name ends with “-stan:” Uzbekistan. Afghanistan. Kazakhstan. Tajikistan. Kyrgyzstan. Dagestan. Turkmenistan.
And in his loneliness and isolation, he gravitates toward what’s familiar. Many young men begin visiting a mosque regularly only after they’ve left Central Asia. Islam, which in the past may have been simply a familiar fixture of their culture, but not a heart belief for them, now becomes a lifeline. It offers belonging and purpose. They are welcomed into a community that offers help and possibility.

This is the uncomfortable truth: the few Central Asian men who become radicalized often do so only after they move from their home countries. They show up on our doorstep and, directly or indirectly, we say we don’t want them. And then they find someone else who does. They find an ideology that gives them purpose, a dream they can fulfill.

The Choice of the Church

Living in Central Asia, I get to meet these young people face to face every day. However, most Americans only see them in an occasional mug shot—that moment in time, perhaps years after arriving in the US, when a Central Asian has embraced terrorism and made his mark by way of a horrific crime. Words like “coward,” “son of Satan,” and “evil lowlife” are spat out like poison by Christians on social media. In our pain and fear we distance ourselves and dehumanize all the foreigners among us because of the actions of a few.
And yes, the crimes are atrocious. But Jesus’s love is greater still.

Jesus looks at desperate young men like Ali—and terrorists like Sayfullo Saipov or Dzhokhar Tsarnaev—and he longs to show them love that has the power to transform lives from the inside out. The gospel is the only answer for the hope and eternal security they seek, and yet they aren’t hearing this message. Many Christians are demanding vengeance while Jesus called us to love and pray for our enemies (Matt. 5:44).

So what if the church stopped trying to build walls and decided instead to open our homes? What if we chose the counter-cultural and counter-intuitive way of Jesus and welcomed these young people whose names, accents, and features are so different from our own? What if we showed them the love of Christ in community so they never felt isolated, marginalized, or tempted by radical ideologies?

What if we were even prepared to follow the example of Christ who demonstrated his radical love for us while we were still his enemies? (Rom. 5:10) What if we made the choice to look like fools, to be spectacles for Jesus, to bless those who hate, to share meals with those who might betray us, to give our lives so that a half-hearted terrorist becomes a whole-hearted follower of Jesus?

What if the love of the church could outshine the hate of terrorism?

Winter is coming, and the nights are getting cold. God is bringing strangers to our doors because he sees them and loves them. Will you see and love them too?

See the original article on IMB.net

The International Mission Board partners with churches to empower limitless missionary teams to make disciples and multiply churches among unreached peoples.